Odd pieces we love that show the ingenuity of the time including pole arms, hawks, canes and cudgels. 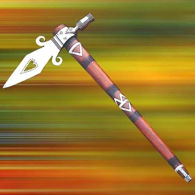 #600244
This tomahawk is hand-forged with a high carbon steel blade. Handle has cross-hatched bands and metal inlays. Overall 22 inches.
$74.95 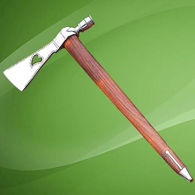 #600198
This bleeding heart tomahawk pipe is hand-forged with high carbon steel. The blade and pipe bowl are indented with a dot motif. Steel mouthpiece.
$79.95
;

I had to sharpen this after it came.  Classic design from about 800AD until just before WWI.  Everybody used this design because it works.  Added to my Longhunter kit.  Also, there was no wedge at the head.  I added one.
Reviewed by: Michael, June 23, 2020

I was able to purchase one of these replicas in Canada, and when I received it, I wasn't disappointed in the least! It is TOTALLY authentic, with, cast iron hardware, genuine wood sections, saddle and barrel rings, real-life lever action including operational shell ejection, metal butt plate, and TONS of weight! If I had a complaint about this collector's piece, it would be that the shell receiver slot is stationary, and doesn't open, although, this could be a safety measure instituted by Denix, to ensure nobody attempted to turn this into an operational rifle. I've had mine for about 6 months, and I never get tired of handling it, cocking and firing it, and examining just how well this replica is put together! Do yourself a favor, and buy one, you won't be sorry you did!   P.S.-To Roland in Canada who was disappointed that he couldn't have one shipped to him, I got mine from www.herooutdoors.ca , at a very comparable price!
Reviewed by: Mark, March 29, 2020

very nice would be better if it could be used as a real rifle
Reviewed by: Alexander, December 24, 2017

Review of: Caps with Dummy Shells

The M1873 Single Action Buntline Special is finely crafted and a really nice replica.
I am very pleased with it and the service from Atlanta Cutlery. I would recommend
this particular piece to any replica gun and/or rifle collector. Very unique with the
12-inch long barrel. I am very pleased with the purchase and with Atlanta Cutlery.
Reviewed by: Stanley, September 26, 2016

Solid hawk, bigger than it appears in the picture.  Feels great in the hand and the finish is good enough for it to be a wall hanger.
As a pipe, there is SO much cosmolene, etc, in the pipe that I am not sure the 'ooverseas metal flavor' will ever be out of it, but it WOULD work if I wver was hard up enough for a pipe to try it!
Reviewed by: Michael, October 08, 2015

It meets,y expectation and looks great on my wall with my 1860 U.S. Cavalry Sabre from Cold Steel along with  framed map of the USA during the Civil war!

I originally ordered this for my Dad, but once I held it in my hand and saw how beautiful and well made it was, I did the only logical thing and ordered one for myself. I do wish that there was an option for honing the blade, but it would still definitely do some blunt damage as is.
Reviewed by: Travis, December 03, 2012

Good item for back woods suruvuerlist.
Reviewed by: William, May 08, 2012