Buy antique knives, kukris and accessories, many from the from the British Empire lost arsenal found at the royal palace of Lagan Silekhana in Nepal, at Atlanta Cutlery. 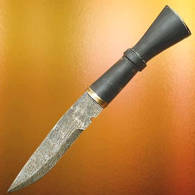 This spear far exceeded my expectations. I've wanted a Zulu spear for my collection, but what I had seen available from other companies were not up to what I wanted. This spear did...... MBL, Florida
Reviewed by: Manny, January 13, 2017

Bought this Iklwa for the same reason the Zulus had them in the first place.  To defend my home.
Reviewed by: Patrick, August 30, 2016

I have had one since they were first offered, and it's an excellent hunting spear. With the way things are going in this world, having a second one seemed like a good move. It's an excellent and formidable close quarter weapon.
Reviewed by: Clifford, July 09, 2015