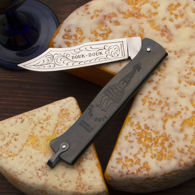 #404616
This easy-to-sharpen, high carbon steel blade is hardened to a Rockwell of 50-53 and is known for its modified scimitar profile. One piece of Ferro blackened steel is rolled over at the spine, creating a thin handle that easily slides into a pocket. The blade is etched with an image of the Douk Douk and scroll-work. 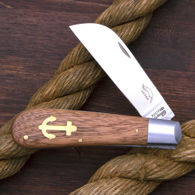 #404613
This is a durable knife meant for hard work, with a strong backspring and a crisp "walk and talk". The sheepsfoot blade is favored by boatmen because it lessens the chances of accidental stab wounds on a pitching deck.
$59.95 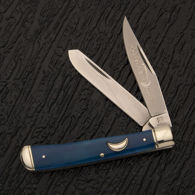 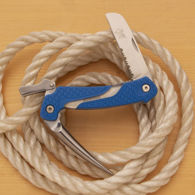 #404605
This knife has been extensively tested in fresh and saltwater. The German-made sheepsfoot blade is titanium bonded, 4166 stainless steel to prevent rust (the titanium is 3X harder than steel and keeps the blade sharper longer). It's partially serrated to cut the tough stuff. The marlin spike is more than capable of loosening the toughest knots.
$44.95 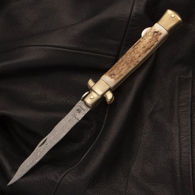 #404603
This pocket knife combines the Italian Stiletto with the exotic Kris pattern blade of Indonesia and legendary Damascus steel.
$84.95 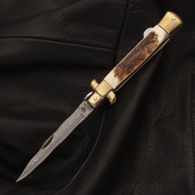 #404602
This pocket knife combines the Italian Stiletto with the exotic Kris pattern blade of Indonesia and legendary Damascus steel.
$66.95 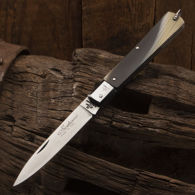 #404597
This folder is bigger than the average pocket knife, the blade is long enough to cut bread as well as the things pocket knives are normally useful for - peeling fruit, opening mail, etc. This EDC is made in Italy.
$26.95 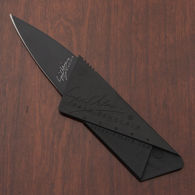 #404595
Originally designed as a disposable surgical knife for medics, paramedics, and aid workers, the Cardsharp is an innovative, super-light folder that's the size of a credit card and not much thicker.
$13.95
;