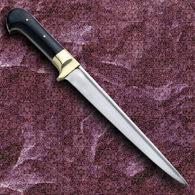 #404247
This large utilitarian, rugged knife used by the tribes of the Khyber Pass, is made from hand forged, 1060 high carbon steel. Includes leather sheath with brass fittings.
$79.95 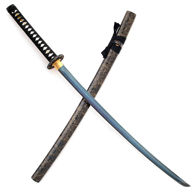 #501705
People will know when you flash this attractive blade, the stunning blue blade makes this katana stand out. Hand forged from 1045 carbon steel with a simulated hamon, iron leaf tsuba and parts.
$94.95 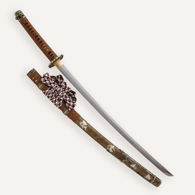 #501515
This gorgeous samurai sword has an attractive floral motif is throughout its design on the cast metal guard, menuki, kashira and saya. Hand forged with incredible craftsmanship, the Damascus steel is razor sharp and has a real ray skin handle that is wrapped with brown cotton. This sword can be used for training and cutting.
$269.95 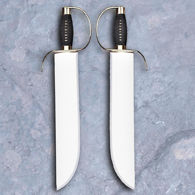 #501383
These Chinese Swords by Cold Steel have battle-worthy blades that are 15" long and 2-5/8" wide with 'D' shaped guards with a long forward quillon. Slip-proof grip is hardwood covered with braided silk cord.
$259.95 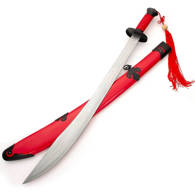 #501707
This Chinese Broadsword has a stainless steel blade and red cotton wrap grip with a traditional tassel used to distract your opponents in your flurry of movements. The perfect companion to practice your moves, plus it looks great on display when not in use!
$69.95 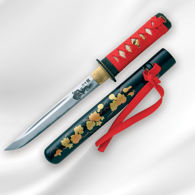 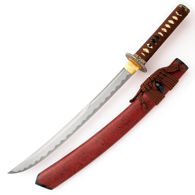 #501700
Slightly different than your normal wakizashi, this stunning sword is one of our favorites. It includes a sword bag & box, cleaning oil, wood stand and certificate.
$294.95 I love this knife, the fit and finish is first rate. I don’t know if I should display it or use it
Reviewed by: Robert, December 21, 2018

Modernized take on a classic.  Well balanced with perfect heft.  Would have preferred a razor edge but comes sharpened and easily remedied.  An unbelievable price for such quality.  A must have for both the avid collector and casual aficionado.
Reviewed by: Grant, February 08, 2018

If Mr. Dean had taken the time to read the details on this piece he would have noticed that the options were "Factory Edge" or "Sharpened" which tells me that factory edge is UNSHARPENED. It seems extreme to find fault with an usharpened knife for not being sharp. I will be sure to specify SHARPENED if i order this knife.
Reviewed by: Kevin, February 05, 2018

This is identical but shorter than the longer katana and both are great swords.  I'm an edge perfectionist and normally put a better edge on anything I buy but both of these I felt no need to improve the edge and that is really rare for me.  For the metal used, the edge, and the feel... this is worth more than twice the price... LOVE IT!!!!
Reviewed by: Frederic, December 24, 2017

Giving it 5 stars because my friend got a tighter sheath though mine was loose, i think it was a fluke. It was pretty easy to righten with some glue and a cedar shim.
Hands down the BEST jambiya on the market both in looks and functionality. Have to learn the trick of resheathing it properly since it has that sudden curve. Also the sharpening was rather good. Would have put a more thin edge on it myself rather than a second bevel but at the size here, its just as good. Contemplating buying another one for modification.
Reviewed by: Timothy, December 09, 2016

As beautiful as it looks in the pictures. I wish it was a little sharper, but it is a great buy for the money. Love it!
Reviewed by: Daniel, July 04, 2016