What are neck knives, hidden neck knives, or the best neck knife? A neck knife as it sounds is a knife worn from a person's neck. It’s usually a small fixed-blade knife which is carried by means of a cord or chain, by which the knife sheath hangs down like a necklace. They can either hang handle up or handle down. The knife may be hung from a loop of natural or synthetic cord, a length of paracord, a leather thong, or even a breakaway beaded or ball chain such as those utilized for military dog tags.

When carried ‘upside down’ the knife stays in place by means of a form-fitting synthetic sheath, which holds it securely in place until yanked on with force. Flip the knife and other material options are possible like leather, but this style of carry can require more effort to deploy the blade. Some manufacturers today are using a looser fitting sheath augmented with magnets.

Neck knives can be single-edged or double edged with blade lengths typically under four inches, and frequently less than three inches. They are primarily intended for utilitarian use, although self defense is becoming more and more popular reason to carry this way. They are sometimes worn under one's shirt for concealment, although this makes a quick draw nearly impossible without practice and even simple retrieval for utility purposes is awkward. They are more frequently worn outside of a shirt. Not only does this make drawing the knife far easier, but it also avoids legal issues in jurisdictions where concealed knives are regulated.

Neck knives, hidden neck knives, or the best neck knife can be of a variety of blade materials from steel and ceramic to plastic and polypropylene. There is just no shortage of styles and functions these handy knives are being made in. 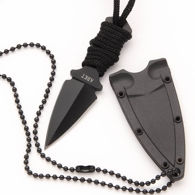 #404494
This little neck knife from American Buffalo Knife and Tool is super light and concealable. The blackened, double edged blade is a single piece of 8CR13 stainless steel. The injection molded sheath includes a 28" bead chain.
$9.95 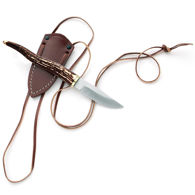 US Made Stag Neck Knife 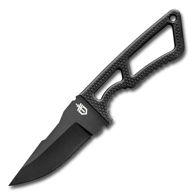 #404349
This self-defense knife has a 420HC steel blade, a compact skeletal frame and a rubber overmold. Features a customizable sheath system. Overall: 6.9 inches 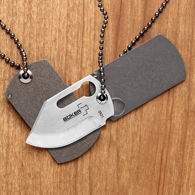 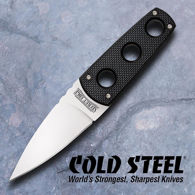 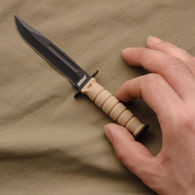 #403636
This Military Type Khaki Finish Neck Knife with a beaded neck chain on a plastic sheath is sized for easy carry everywhere.
$8.95 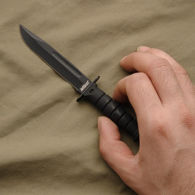 #403637
This Military Type Black Finish Neck Knife with a beaded neck chain on a plastic sheath is sized for easy carry everywhere.
$8.95 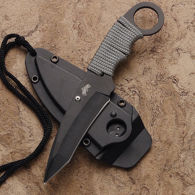 Was excited when I received my order. Awesome knife but after a month the coating on the knife tore and started peeling off. Making it very non useful. For the price i expected better from Gerber.
Reviewed by: Chris, August 01, 2019

Great little knife! It has a lot of utilitarian uses! I got it as a well needed letter and box opener for around the house. I have found myself using it for tasks in the kitchen and in the vegetable garden. I'm pleased with its size, sturdiness, the feel of the grip and the myriad of uses I have used it for on a daily basis due to the convenience of the neck sheath, when I wear it. You will be pleasantly surprised and pleased with this knife.
Reviewed by: Art, June 10, 2019

Review of: US Made Stag Neck Knife

I was a little skeptical at first about the blade of the knife being made from stainless steel, ( just felt it should have been made from traditional carbon steel like the original patch knives ) but after contacting Atlanta Cutlery and finding out the grade of the Steel ( X46Cr13 ) and just the fact the grip is a piece of long aged stag, it was just too good to pass up. It's a very handy blade that has a lot of character! Thank You
Reviewed by: Mike, February 12, 2019

Love it, bought two more as gifts for my adult boys.
Wish you offered a personalizing service to engrave like old dog tags.
Reviewed by: Thomas, February 17, 2017

I wanted this knife to use as a letter opener.  When it arrived I discovered that it was more than just a letter opener.  It has a sturdy blade with a strong handle.  I swear you can use it as a small fighting knife.  I wanted it to look more like a KBAR USMC knife so I used a black Sharpie to go over the grooves.  I then used a  brown Sharpie to go over the rest of the handle.  It now looks like a miniature KBAR.  If I have time I plan on purchasing some thin leather and creating a KBAR type sheath although the sheath that it comes with is excellent.
Reviewed by: Tony, October 31, 2016

This item is great for opening letters. With the neck chain you can carry it anywhere. It's great.
Pedo
Reviewed by: Pedro, February 15, 2016

Looks like a itty bitty Kbar it's made in china but has a good feel and looks cool on your web gear/LBE/battle rattle. It's sharp but not country boy sharp. There is a small catch in the sheaf to hold it in good but only works one way. I can get two and half fingers and thumb on the handle. IT will work as good as a pocket knife. I like it it's worth ten bucks.
bowie county TEXAS
jimbo
Reviewed by: jimmy, August 02, 2012