Sold Out
Jacob Snider, an American from New York, developed this breech loading system for the Pattern 1853 Enfield, the most prolific imported percussion rifle in use by both the North and South during the US Civil War. In 1864 the British Board of Ordnance adopted the Snider system, with the first being issued in 1865. Improved in 1867 by the use of Colonel Boxer's center fire brass bodied cartridge, the rifle was used very effectively in the Abyssinian Campaign of 1868. The system utilized a hinged breech block with an internal firing pin assembly that permitted the use of a self contained cartridge of lead bullet in cardboard, and after 1867, brass casing. This highly efficient conversion system prolonged the active life of the P-1853 .577 rifles up until 1871 when the Martini System was adopted. This version was also known as the Two Band Snider.

All show extensive use but each appears, by and large, to be complete. They may, or may not function, once the thick layer of congealed dirt, grime, grease and rust are removed, and may suffer from cracks and breaks which is to be expected after more than a century of neglect. Again only offered in AS IS condition; complete with caked on debris from battle and storage. There are NO Guarantees other than that each gun is completely genuine and very old. These relics should be likened to an archaeological dig, so no unreasonable demands or gripes please. Now offered at a bargain price for the enthusiast to enjoy as is or to spend the time and TLC to carefully restore; each weapon is REAL, ANTIQUE and is offered AS FOUND. Picture is a typical example; each weapon will vary of course.  There is a $10.00 additional shipping & handling charge with item, cannot be shipped USPS.

Some guns may have additional pieces (sorry no choice) like minor parts & screws.

Condition: usually show rust & pitting and be covered in dirt as originally stored.  Otherwise they may not operate because of seizing or could be otherwise incomplete.  Plus there may be additional cracks, missing chunks, old repairs.

Write a Review
Write a Review
Ordered Tuesday afternoon and delivered Thursday afternoon! The Snider was entirely complete, no rust, and looks great. No markings whatsoever. Crisp rifling in the barrel and looks largely unfired. Minor handling marks but I didn't get the 'Hand Picked' option. What made this special is the staff at Atlanta Cutlery- they go above and beyond in their levels of service and customer care. The rifles are excellent, the staff is even better!!
- Christopher, July 31, 2015
Was this review helpful? Yes No (0/0)
I bought two of these about 2 years ago got one that was a napal one and one that was an a marked Snyder with Napal script on the trigger guard but all else was English produced every thing cleaned up and It shoots like a charm.  I sold the Napal one and restored the English one. With the money that i got for the Napal production ordered the reloading dies and all the items needed to reload. If you want a part of history get this.
- Timothy, January 15, 2015
Was this review helpful? Yes No (0/0)
I have purchased 2 napal made martini rifles before and had very good luck with them one was real good one need more tlc than the other, i have shot both what a joy. recieved my p1864 uncleaned snider enfield one week to the day after ordering, and there it was black and filthy, two days of cleaning and oiling i,ve been albe to fire 5 shots through her, yes i,ve named it i,m a reinactor and this is now one of my prize posseions, very pleased with how the gun works and the buessiness of alanta cutlery
- Jim, December 10, 2014
Was this review helpful? Yes No (0/0)
Received my first Snider. After a basic cleaning, I see it is a Nepalese manufactured rifle and not the British as in the ad. No problem, as the rifle is in good condition for it's age and everything works on it. Great Customer Service and fast S&H.
- Joseph, July 11, 2013 | Verified Purchase
Was this review helpful? Yes No (0/0) 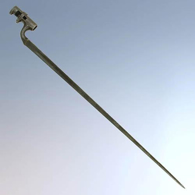