The feared Vikings took to the seas from Scandinavia in their fearsome longships for many reasons; exploration, trade and of course to raid and plunder. From this rich culture came some of history’s fiercest warriors, myths and legends. Atlanta Cutlery has an extensive selection of fine Norse replicas, from drinking horns, clothing and jewelry to weapons and Viking armor. Outfit your next great sea going adventure from our well researched and wide array of items for men and women. 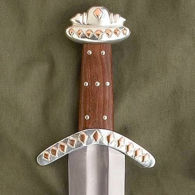 Together with weapons such as the axe, seax and spear, the Viking sword was one of the most useful offensive tools for the Norsemen (Vikings).

Viking swords were expensive and time consuming to make. They were typically double-edged, but single-edged swords were not unknown. The blades were pattern-welded, a method of sword making where iron and steel were forge-welded together.

A Viking sword was typically meant for single-handed use, with the other hand holding a stout round shield. They were more than mere weapons of combat; a sword often indicated wealth and status with handles and fittings covered in knotwork and designs that showed the hidden depths to their rich culture. Also, these blades were heirlooms and given names and survived generations.

Atlanta Cutlery is proud of the variety of swords it offers. We carry a stunning range of Viking swords that would suit both the standard warrior and Viking royalty. We also understand that no Viking sword collection is complete without the Ulfberht, a weapon so ahead of its time it was considered mystical in some quarters. Our amazing replica does this sword justice.

Also, check out the Migration Period Sword based on a 7th-century design and Eric the Red Sword that is inspired by the legendary Norwegian Viking. Of course, we have much more in this collection – blades forged with expert hands and with detail exquisite enough to turn the head of even the most battle-hardened Norse warrior.

Although an authentic Viking sword is hard to come by, we will give you premium-quality weapon replica derived from those wielded by the most terrifying seafarers in history. 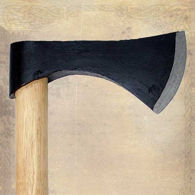 Long-handled Viking axes were widely used at the height of Norse domination. They might have been even more popular than the sword. The double-handed broad axe that movies often depict them with were developed later, perhaps around the 10th and 11th centuries. The Viking warrior could not fight with the broad, two-handed axe and hold the shield at the same time so he would wait patiently, shielded by the first line of soldiers, and rush out at the opportune moment to inflict damage. Berserkers were a fearsome sight on the battlefield.

Of all the offensive weapons, the Viking spear was the most common. It featured a spearhead fixed to a wooden shaft using a rivet or pin. The spear was ideal for thrusting and throwing. The blades heads came in different shapes and sizes, with some exhibiting “wings” on them which prevented them from sinking too deep into a target for easier retrieval. Skilled Viking warriors are said to have had the ability to hurl two spears simultaneously using both hands.

Viking knives were another important part of the armory. They were carried throughout the day on the belt. The blade was shorter than the sax (or seax) that was popular during the early Viking Age. This one-handed, single-edged weapon had simple fittings and was made of bone, wood, or horn.

Atlanta Cutlery has an excellent collection of Viking spearheads, axes, knives, and seaxes. Besides looking good, all weapons in the selection are made with a high degree of care and detail and built to perform and last. 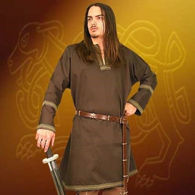 Viking men and women dressed for the inclement weather, but had a stylish way of  using the linens and wools naturally available to create a unique, simple yet handsome look. Atlanta Cutlery sells apparel for just about any Viking ensemble from jewelry, drinking horns and utensils to tunics and dresses.

Cool knife with sturdy blade. Like the sheath and design in the handle.
Reviewed by: Robert, August 07, 2022

Very pleased with the sword. Not so much with the scabbard. Leather is thin and glued instead of sewn. One leather hanger was not even glued.Scabbard is not durable enough for actual use.
Reviewed by: Brian, June 28, 2021

Excellent sword, decent attention to detail as well. Holy and pommel look excellent. Makes me want to get a couple more but different variation lol. You won’t be disappointed and great shipping speed from Atlanta Cutlery.
Reviewed by: Kevin, June 26, 2021

Truly immaculate!!! Very pleased with this axe, beautifully balanced and a perfect piece to added to my collection. Has a nice dark stain that contrasts well with the handle; very well made weapon that is a true piece of art!
Reviewed by: Joshua, June 25, 2021

Well  made.  Great conversation starter.  Not bad for the price.
Reviewed by: Jim, December 05, 2019