This knife was designed by master knifemaker Gil Hibben, an avid hunter and fisherman. His firsthand experience as an Alaskan hunting guide contributed to the design of this custom knife.

This hunter knife has a full-tang 420HC stainless steel blade, complemented by a stainless steel guard and pommel. The handsome CNC machined, layered Micarta handle scales have a knothole pattern and are secured to the tang by heavy-duty screws. The handle features ridges just below the handguard to improve control when using the knife. The knife slides securely into a premium black leather belt sheath with a snap closure.

Write a Review
Write a Review
Not actually full tang
This is a beautiful knife, but the construction isn't durable, and it certainly isn't full tang, as advertised.  After batoning it once (three, maybe four strikes) to break up some firewood, the blade is completely loose in the hilt.  Removing the three screws through the handle, I figured I could troubleshoot the problem, and perhaps just tighten the blade back up.  Upon removing the screws, I realized the knife is not full tang.  Moving the blade back and forth with the screws removed and the holes exposed shows no movement inside the holes, which tells me that the blade is not meaningfully secured in any way by those screws.  The tang stops somewhere above the very first screw!  While we're on the topic of those screws, I was surprised that the handle scales couldn't be easily removed once the screws were removed, even with some light tapping with a hammer.  I expect that they're glued onto the hilt construction, rather than secured in any meaningful way by the screws.  I suppose I shouldn't have expected incredible build-quality from a sub-$100 knife, but this was very disappointing.
- John, July 19, 2022 | Verified Purchase
Was this review helpful? Yes No (0/0) 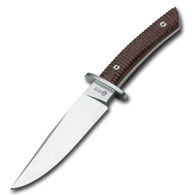 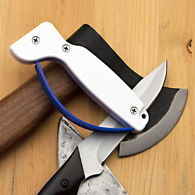 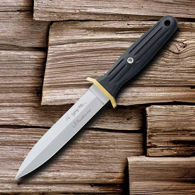