A historical sword was a symbol of bravery and prestige. Not just anyone could have one. They were earned and with them came respect. Swords literally carved out kingdoms throughout history. Tough, functional, and effective in hand-to-hand combat, they were the choice of royalty, knights, men-at-arms, and peasants alike.

Many use the term “battle-ready swords,” but what does that mean exactly? Essentially, they are hand-forged, fully functional blades made of high-carbon steel that can perform like the originals. Unlike stainless steel, this can be too brittle to handle a true battle situation. Historical swords can be used in training and live reenactments. Use common sense though, if bashing edge-to-edge. Use the right tool – a theatrical blade with rounded edges and tip. Historical swords are the kind of blades used in medieval and Renaissance fairs, Civil War reenactments and shows for fencing and simulated battles. High-carbon spring steel is generally the strongest material used in blade making and we feature 1065-1095 on our site. It is the steel of choice for battle-ready swords, which can then be hand forged and tempered. We offer a good selection of historically accurate functional blades from the US Revolutionary War and Civil War to more current military offerings. To hold a functional full-tang blade is to come face to face with history. They look like the originals, were made like them, and flex and balance like their historic counterparts.

Products featured on Atlanta Cutlery and its sister website Museum Replicas include historical swords from the ancient Greek, Rome, Viking, Medieval and the Renaissance periods up to the American Civil War. Fancy yourself a Musketeer or knight errant? How about a Spanish conquistador or marauding Viking? Maybe a Roman Centurion? One hand, two hand, bastards, rapiers, and cut-and-thrust were all choices men made when conflict loomed. You’ll find what you need for your persona, collection, or reenactment. Made from originals when possible, we’ve captured the little details for authenticity and maybe, more importantly, the function these blades were meant for.

#501832
This replica longsword is part of the Royal Armouries Collection by Windlass. This sword would have been used principally by armored men-at-arms and knights, usually one-handed on horseback or two-handed on foot. Swords like this were being used all over Europe in the second half of the 14th century and would have been familiar to fencing masters like Fiore dei Liberi and used at battles like Sempach in 1386. This sword seems quite specialized for armored combat and half-swording
$674.95

#501835
This replica one-handed sword is part of the Royal Armouries Collection by Windlass. An unusual single-edged arming sword of the mid-15th century, reputedly from the Castillon group of swords found in a nearby river and purchased by the Royal Armouries in 1984. Over 80 swords, as well as other weapons, were reputedly recovered from this one archaeological find, but this sword is without direct comparison in that group, having a distinctive hilt and very unusual single-edged blade.
$594.95

#501831
This replica knightly longsword is part of the Royal Armouries Collection by Windlass. The original sword is believed to have been found in the River Thames before finding its way into the Tower of London collection. This is the sort of hand-and-a-half sword that was often carried by knights and men-at-arms, and it features a two-handed hilt with a scent-stopper pommel.
$694.95

#501830
This replica English infantry hanger, or falchion is part of the Royal Armouries Collection by Windlass. The original sword has resided in the Royal Armouries collection since before 1916 and its exact origin before that is unknown, but it is part of an English group of similar swords. These short swords were popular sidearms for billmen and archers during the Wars of the Roses and into the early Tudor period.
$594.95 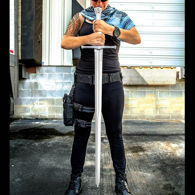 #501827
This is a modern spin on a proven, time-tested sword design. This sword has sleek, rugged tactical engineering with perfect blade-to-hilt balancing. Includes a black wooden scabbard with a leather belt hanger. 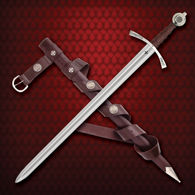 Faithkeeper - Sword of the Knights Templar

#501691
This medieval Crusader sword has a deep fuller on both sides of the high carbon steel blade, which has been pierced with a cross at the ricasso. Also features an engraved guard and inset coin in the pommel. It comes with a matching leather scabbard and belt. Comes factory sharp.
$394.95 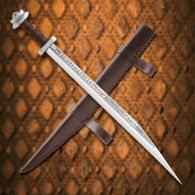 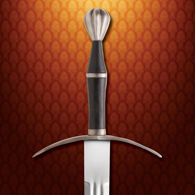 #501510
This hand and half sword can easily accommodate two hands. Large, but amazingly light and well balanced, this high carbon steel sword has a darkened pommel and cross guard. Arrives sharpened from the factory.
$324.95
;

Nice piece!  The problem for me is that I am to small to fit it!!  At five feet seven inches with a thirty two inch sleeve it is more blade than I can handle. Still, it is dammed impressive!
Reviewed by: mark, June 24, 2021