Shortly after photography was invented proud frontiersmen were having their portraits taken with their prized Bowies at their sides. This massive knife style was being produced in Sheffield, England for the American market, just in time for pioneers and soldiers to show them off for the photographer’s lens. Along with several other styles, cutlery shops promoted this type of knife as the hunter’s companion. It’s large enough for camp chores and disjointing game, yet light and fast enough for self-defense.

Write a Review
Write a Review
Bowie for me
I bought this for myself and the only problem that I ran into was that my wife took it!  Wish that I had kept it hidden.....
- Steve, February 11, 2021 | Verified Purchase
Was this review helpful? Yes No (0/0)
Bowies
Of the 6 bowies I have ordered I have not ever been disappointed. appear to be of good workmanship.  I plan to probably to purchase others also.
- William, September 15, 2019 | Verified Purchase
Was this review helpful? Yes No (0/0)
Hunters Companion Bowie Knife
I saw this knife on the Atlanta cutlery website a couple of weeks ago and thought it was really beautiful. I also liked it because it was big, and I prefer big Bowie knives. When I got it I was not disappointed at all. The blade and clip point are beautiful, and it is really sharp. I also really like the wooden handle, and the sheath is nicely made and genuine leather. For the price, this is an excellent Bowie knife. I could not find any flaws  on it. Crocodile Dundee does not know what a real Bowie knife looks like! Ha ha Ha ha ha.
- Trenton, May 23, 2019 | Verified Purchase
Was this review helpful? Yes No (0/0)
Massive is understatement
I didn’t bother to take notice of this knife’s dimensions.  It is basically a slightly undersized short sword.  I have an RTAK-II that this thing absolutely dwarfs.

I was thinking it was along the lines of maybe a 9” or 10” blade, nope, this beast is 13”, 18” I think over all.
So, it doesn’t come out of the sheath very quick, and you (my opinion) look a bit silly with a knife that is the length of your femur hanging on your belt.
But...it’s awesome.  Felled a few small trees, busted apart (by stabbing and prying) a 15” thick dead tree, made kindling by batonning (that a word?) it through logs....the thing just eats up work and the edge held great.  I sharpened it even more and spent a little while slicing up water bottles for fun.

Think smaller machete and that you wouldn’t feel under armed if you had it and was face to face with a polar bear (seriously, this thing is ma-ass-ive, like, dundee’s Knife is a toothpick to this thing) 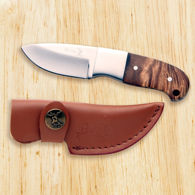 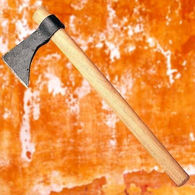 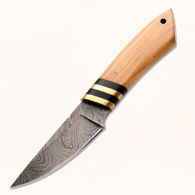