Sold out!
This beautifully designed and crafted knife is from Spain and made with the input of local military and police forces to their specs. Features full tang, 440 razor sharp stainless steel blade and hammer strike steel pommel with a very comfortable and secure rubber grip. Includes leather belt sheath. View more Muela Products

Write a Review
Write a Review
Great knife! I bought 2 Muela knive's including this one and they are very well built! While the blade thickness is not great, this makes the knife light and fast which for a fighting knife is important! Easy to carry all day and the handle enables a secure grip even when wet! The metal pommel which can be used to hammer with is secure and has not loosened up on me yet, despite hammering on a few things like breaking some Brazil nuts and hammering a nail into a board for kicks! The quality of the steel is good enough to not require a 1/4" thick blade. This one like the other came shaving sharp and is made out of the Spanish version of regular 440 stainless steel which is better in that it is Chrome Mo-Van stainless steel which means it contains Vanadium which is a grain refiner and allows for a finer edge. Regular 440 or 440A does not contain Vanadium. The heat treat on these blades seems to be quite good as well. The plastic sheath was a bit different as I am used to leather or nylon sheaths, but I must say that now that I am accustomed to this sheath it holds the blade securely no matter the position and there are no buttons, snaps or fasteners to fuss with. It also allows for a rapid deployment of the knife, once you get used to it! I am not really a fan of the sawback edge on knives but at least this one has the sawback on both sides rather than on only one side like most cheap knives have when they have a sawback on them. Would definitely recommend if you want a decent knife to carry on your belt which won't break the bank!
- Leon, November 27, 2011
Was this review helpful? Yes No (0/0) 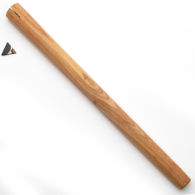 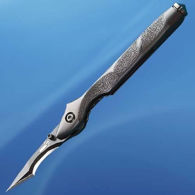