The ever-popular Practical Katana Plus gives the martial artist the opportunity to own and use a Hanwei sword at the cost of an economy sword. The high carbon steel blade is forged and differentially hardened, using the same process as the more expensive blades. The temper line is authentic and prominent. The long tang is double-pegged for security. The fittings of the Practical Plus katana are decorated in a Japanese Dogwood motif with dragon menuki, and the handsome Tsuba is of an iron “sunburst” design with a brass habaki. Cost savings are effected by using fittings which, while making no claims to authenticity, are very strongly built to withstand the rigors of cutting exercises in the dojo.

Write a Review
Write a Review
Not Quite As Advertised
The photos for this sword are very misleading.  The hamon is actually a very regular wavy pattern like you would see on any cheap replica sword.  It looks better than those, in that it doesn't appear to have just been etched on with a wire brush or something, but it does not have the authentic look that the one in the picture does.  The kissaki, however, appears to be brushed for some reason.  Also, the wrap is a leather-like material, rather than the cotton-like material in the pictures.

Overall, to a layperson like myself, it feels like a very solid, no-frills sword that will hold up to a bit of abuse much better than a slightly sharpened piece of scrap from a renaissance faire.  I was really looking forward to an authentic hamon, and I should have known that you can't get one at this price, but it was advertised as having it, and it doesn't.  If that's a major selling point for you, look elsewhere, Hanwei is lying.
- Damian, July 25, 2021
Was this review helpful? Yes No (0/0) 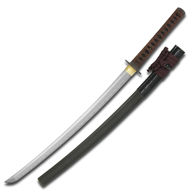 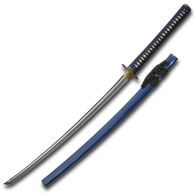 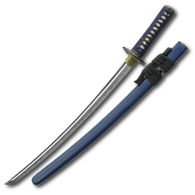