One of the most unique and effective Bowie designs we’ve come across. The original is in a private collection, but it wouldn’t be out of place on the belt of General Santa Anna while seeing courageous action on the frontier. 1085 high carbon steel, uniquely shaped, hand-forged full tang blade. Solid brass finger guard and bolster with hand-finished, solid wood handle. Comfortable and wicked fast. A must for any collector. Arrives sharpened from the factory. Includes top grain leather belt sheath with embossing and metal reinforced tip. Made by Windlass Steelcrafts.

Can be engraved with up to 3 initials for an additional fee. Click here for details on our personalization service and return policy.

Write a Review
Write a Review
A Sophisticated Piece
I continue to be impressed by my Mexican Bowie. In addition to all of the positive things that have been said about its beauty and usefulness (which I agree with whole-heartedly) It is also a fascinating piece of transitional knife fighting technology. I suspect that the original specimen was made around the time of the U.S.'s Civil War.  At that time, and perhaps slightly before, The prevailing "philosophy" of knife fighting in the Americas  shifted from using the knife more or less like a sword, including using the instrument as a parrying weapon, to of a "stick, slash, and move" weapon which emphasized aggression and movement. The Mexican Bowie seems to be designed to function well in both modes of knife fighting. Fascinating!
- Johnb, November 04, 2022
Was this review helpful? Yes No (0/0)
Beautiful and functional.
This is such a beautiful blade! Keep in mind I bought this for functionality; I "cowboy cook" every Saturday, outdoors, wood coals. I wouldn't want it to be my main tool, but one can chop branches with it, strip bark, carve and whittle, albeit a bit ungainly at it since the blade is a bit more than a hand a half long for me. It feels good in your hand, the taper of the grip and the bottom pommel-ball(not sure what that part is officially called) help to tuck the hand up against the cross-guard for a very secure grip.
Then there's that pommel-ball bit, it seems to fit into the palm like a socket, helping to twirl and flourish while maintaining a reliable grip very smoothly, much better than a straight, cylindrical grip. I've thought of replacing the handle with antler, but it's really nice as is. The ball shape allows for a freedom of movement with the blade that I'm not sure how to explain, you have to hold in your hands and let it flip and spin in person, but the moment I took it out of it's sheath I knew, lol. I bet you could snap-throw this thing with a literal flick of the wrist (I'm no going to try it for fear of breaking that tiny vicious tip).
Keep in mind, I bought mine for functionality and as a project blade. I mainly use it for cooking. Very serviceable cutting up meats and vegetables, although I re-shaped the front quillon to cover the index finger more, allow the blade to get closer to the cutting board (it wouldn't cut all the way down). Even after all that abuse, hammering the quillon with a mallet, the grip remained secure and stable. I think with a bit of tinkering there's a way to turn the back quillon into a bottle opener, lol.
The blade itself has a nice thickness to it. It was straight with it's pommel. The finger grip bits on the back are functional, e.g. giving your offhand a secure, safe place to grab the blade either pulling it towards you in a planing/scraping fashion (stripping bark) or chopping down (when you quarter a half of watermelon). I really like the curve of the blade ending in that impossibly sharp tip, like a needle point. You should be able to make a new loop hole on your belt in moments. The sheath is serviceable I really like the bottom metal bit, I plan to even re-use it when I make a new sheath, although I'll likely put a couple holes in it to run some cordage through it for a leg strap. So yeah, I really like this knife, if it was of lesser quality I would've broken it by now with the abuse I've given it, easily, but it's held up like a champ. It really is practical/functional, not just some junk blade for accenting wall décor, but for wearing at your side and actually using. I'm positive I can look forward to years of service with it.
- Josh, September 26, 2021 | Verified Purchase
Was this review helpful? Yes No (1/0)
Interesting Knife
Interesting knife.  Made in India. I polished to mirror finish.  Had blade sharpened for $15, rough but acceptable.  I refined edge, now razor sharp.  Wood handle nice size and shape but not varnished.  Impressive when drawn from sheath.  Brass some what rough but polished up nice. Have bought knives this size made form stainless for 75% less.  Is carbon steel worth extra price?  Time will tell. Your choice.  Rated 4 stars for blade finish and handle not varnished
- Henry, August 18, 2019 | Verified Purchase
Was this review helpful? Yes No (0/0)
Mexican Bowie
Great Collection Piece - Excellent Static Display
- John, August 12, 2019 | Verified Purchase
Was this review helpful? Yes No (0/0)
Mexican bowie
I've wanted to buy this for years.  It's as good as I expected
- Dana, November 09, 2018 | Verified Purchase
Was this review helpful? Yes No (0/0)
A REAL WORK OF ART! DEADLY DESIGN. I HAVE MANY VERY NICE WELL MADE KNIFES, EVEN ONE MADE BY RANDALL FROM FLA, THATS 30 YEARS OLD AND VERY USED. THIS KNIFE MAY WELL TAKE ITS PLACE AS TOP DOG,I HAVE YET TO TEST IT OUT, GET BACK ON THAT LATTER.
- Gary, March 05, 2013 | Verified Purchase
Was this review helpful? Yes No (0/0)
Finally received it,,,and i love it.
only issue i have is some of the threading has come loose on the sheath.
very well made   thanks.
- Michael, November 05, 2011 | Verified Purchase
Was this review helpful? Yes No (0/0)
Hi Michael -

We shipped large numbers of these Bowies to customers in August and September.  More are expected to arrive in our warehouse this week and we will continue filling orders that have not yet been shipped.
- Atlanta Cutlery Team, October 17, 2011
Was this review helpful? Yes No (0/0)
I ordered this Bowie as soon as it was advertised but it was on backorder. It was a few months wait but I'm glad I bought it. Nothing like any Bowie I've used.

The swedge is not sharpened but the needle sharp clipped point will still do massive damage. The sheath is the nicest of all the Windlass Steelcrafts Bowies. Nice brass guard and filework on blade. 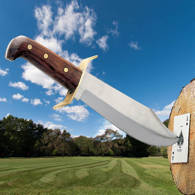 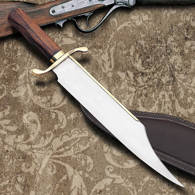 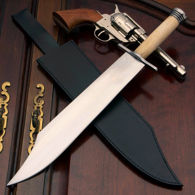 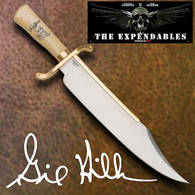