Sold Out
The experts at Windlass Steelcrafts have made a great knife to take camping, hiking or out on the hunt.  Made of blackened 1085 high carbon steel blade and parts, the contoured wood handle is covered in genuine fish skin for an unerring grip in any weather condition. A fine companion in the great outdoors that will give you years of tough service and look good doing it. Includes leather belt sheath.
View more products from Windlass Steelcrafts

Write a Review
Write a Review
I wish I could have given this knife 5 stars, but unfortunately it arrived with some rust on the edge of the blade.   Most of the rust I was able to remove with a diamond stone, however, the worst of the rust was at the very tip of the knife and was too deep for me to grind it off without changing the shape of the blade.  I do not hold this against Atlanta Cutlery, as the knife was just not properly cared for by the maker.  It was wrapped in some oil or grease of some sort but the entire edge just was not covered with it.  Other than the rust, the knife has a great feel and balance in the hand, and the sheath seems to be of good quality.  I look forward to using it, just wish it would not have been flawed right out of the package.
- Jim, February 18, 2016 | Verified Purchase
Was this review helpful? Yes No (0/0) 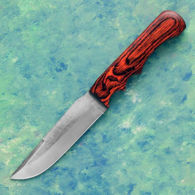 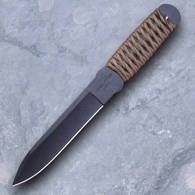