Sold out!
Balisong or Butterfly knives, with their revolving handles, and strong locking mechanisms, have had a certain mystique since they were first popularized in the early 1980's. They were beguilingly simple in construction, looked a little intimidating in a user's hand, were relatively inexpensive, and there were many flashy ways to open them with a few deft turns of the wrist. In short, they were a knife industry success story. There was just one downside. In the early 1990's, United States Customs outlawed the importation of all butterfly knives under, what can only be assumed to be, an arbitrary and unreasonable interpretation of the Switchblade Act. Many U.S. states soon followed suit including California, where mere possession of a Butterfly knife is a FELONY.

But Cold Steel has produced a completely legal version of the butterfly knife; The Paradox®. It's designed from the ground up to specifically mimic a traditional Balisong or Butterfly knife in every respect but one: ­ it can't be opened with one hand! That's right, the Paradox® is not a switchblade, gravity knife, or assisted opener and can't be opened without the use of both hands. So, while it looks and feels like a classic Butterfly knife, it isn't. It's a legal Balisong! Its twin handles feature two integral springs that are similar to a conventional slip joint folder. They are designed to rotate 180 degrees around the blade's unique split tang and use strong opposing spring tension to lock the blade open or hold it firmly closed. Don't worry about it taking two hands to get it into action, since once it's opened it will never close inadvertently. Plus, its locking mechanism is impervious to spine whack and the most violent stresses and shocks imaginable.

The leaf shaped blade is hollow ground from imported Japanese AUS 8A stainless steel and, due to the latest advances in heat treatment, it offers a thin, ultra keen edge that lasts. The skeletonized handles are CNC machined from solid billets of 6061 aluminum and feature a hard-anodized coating to reduce scratches and oxidation.View more Cold Steel products 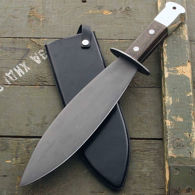 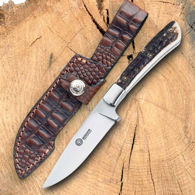